This was shot on Saturday in Glacier National Park, Montana, on the Hidden Lake hiking trail (which runs along the eastern edge of the Continental Divide). As my sisters and I were scouting a place to stop for lunch, I noticed a flurry of activity just off the path. Closer examination was fruitful and I captured what my extremely-reliable-and-brainy-biologist-older-sister said was a rare moment: a flurry of gutsy juvenile arctic ferrets darting about their burrow system, excitedly waiting for their mom to come home and feed them a vole.

No editing done on video, just a little Beethoven "Symphony No. 3 in E-flat major, Opus 55" remix.
Posted by Large Marge at 12:31 AM No comments:

I was raised in a household that was very technologically advanced for the 80s: we had a BETA machine and an Atari (cable wouldn't show up until 1993). My two sisters and I were not allowed to touch either high-tech device without the immediate physical presence of my dad, and even then, it was always a smarter move to steer clear of poking tiny fingers and pressing buttons in/on said devices, unless we wanted a stern talking to. And by talking to, I mean yelling at.

Mom and Dad neatly filled the bottom drawer of the TV stand with the BETA's smallish tapes which were filled with episodes of Dr. Who, Inspector Clueso, Twilight Zone, and Dad's military shows. There was one tape, however, that didn't contain boring/adultish/stupefying shows and was set aside as the "Kid's Tape." We were allowed to watch it as much as we liked. And we did. Constantly. Thanks to its precious cargo: the network airings of 3 popular music videos.

24 years in the making, here is a countdown of my favorite videos on the "Kid's Tape":

For whatever reason, this video didn't make me want to listen to more hair bands, instead it launched my love of spandex and desire to wear zebra jackets. Go fig.


Neon furniture + Ray Parker, Jr. apparating inappropriately + a hot blonde with teased hair + celebrity lip-syncing. Pretty sure that's the Dogma 95 of 80s music videos. Confession: even tonight as I watch this video I am stumped as to who some of the celebs are and why they were chosen to appear in the video. Where they Second City alums? Former co-stars of Bill Murray? Stars of then-popular TV shows that appeared on the network that aired the video? The answer might as hard to answer as that grey jumpsuit was to put on.

1. Huey Lewis & The News' "I Want A New Drug"
http://www.youtube.com/watch?v=q3thtzaEyZg

This song was suck in my head all day long today, but for whatever reason EMI has requested that YouTube disable the embedding device. Yeah, I can see that. Huey Lewis is suffering from way too much over exposure these days...achem.


On an early morning stroll along the eastern beaches of Jekyll Island, Georgia, this past April, I found a very alive Sand Dollar. Here is his triumphant return to the sea.
Posted by Large Marge at 1:27 PM No comments:

The Anderson family cat, under the good care of sister Trina, recently moved from Miami to Manhattan. In my first "hello, how do you do" with Junior, he showed me one his favorite past times: brushing his face. I think Junior and I will get along very nicely.
Posted by Large Marge at 1:22 PM No comments: 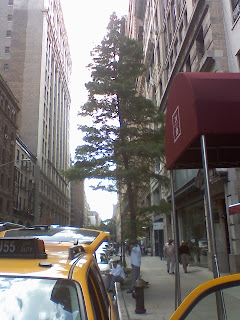 Posted by Large Marge at 1:21 PM No comments:

This video is dedicated to my 7 year-old nephew, Joe, founder of the hilarious game, "C'Mere, Get Lost," which is based on this story. Go ahead, ask him how to play.
Posted by Large Marge at 3:50 PM No comments: